Ms. H passed away on April 24th, 2011, following negligent behavior by the staff of Tendercare of Portage.

When Ms. H was admitted to Tendercare on April 12, 2011, she was noted to have “good” rehab potential. She was also determined to be at risk for falls, so the nursing home staff developed a plan of care to address the risk and to prevent falls. The plan of care included, in part, that foot rests be utilized on the wheelchair when Ms. H was being propelled, and that one person must provide physical assistance with all transfers and walking.

Ms. H was known to make multiple attempts to ambulate and transfer on her own while in the nursing home. One such instance occurred on April 23, 2011. Ms. H was sitting alone in a wheelchair in the hall. Both foot rests were in place, despite the fact that she was not being propelled. When Ms. H attempted to self-transfer from the 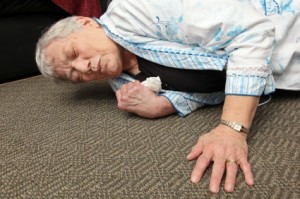 wheelchair, she stood and tripped over her wheelchair foot rests. This caused her to fall backwards onto her buttocks and hit her head on the floor. When she fell, she was observed hitting her head hard, and a loud crack was heard. She immediately went limp, became unresponsive and unconscious, and vomited twice. When EMS arrived, Ms. H was noted to have a large hematoma (a solid swelling of clotted blood within the tissues) on the back of her head. She screamed that she was not comfortable, was noted to be very agitated, and continued to vomit.

A CT scan of Ms. H’s head showed multiple injuries, including 2 subdural hematomas (bleeding into the space between the brain cover and the brain itself), subarachnoid blood (bleeding in the area between the brain and the thin tissues that cover the brain), and a significant subfalcine herniation (displacement of the brain). A neurosurgeon determined that there was no likelihood of a good outcome from any kind of surgical intervention for Ms. H and opined that Ms. H would likely remain in an unconscious state.

Donna Mackenzie has filed suit on the behalf of Ms. H’s husband against Tendercare of Portage.