Mr. J was admitted to Hope Healthcare Center on December 23, 2010. Upon arrival to the nursing home, he was 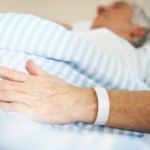 recognized to be at a high risk for falls due to intermittent confusion. Mr. J had a history of three or more falls within the previous three months, had balance issues when walking and standing, decreased muscle coordination, required the use of an assistive device when walking, and was being administered medications that increased his risk for falls. Due to his increased fall risk, it was determined that Mr. J required assistance with ambulation and the use of a tab alarm in his bed and wheelchair to alert staff in the event he attempted to get up without the assistance required.

On the evening of February 14, 2011, a tab alarm was not in place and functioning. Mr. J was able to get out of bed unassisted and walk down the hall to place a telephone call to his wife. After placing the phone call, Mr. J walked all the way back to his bedroom with his walker, again without the assistance he required from staff. Upon returning to his room, Mr. J fell next to his bed. He was found alone, lying on the floor in his room.

When EMS arrived, Mr. J reported that he was in pain measuring a 10 out of 10 on the pain scale. An X-Ray revealed a fracture of his right proximal femur. He required surgery. After surgery, Mr. J continued to experience pain. He started physical therapy, but his ability to participate was severely limited due to the pain in his hip. This led to difficulty with ambulation and rendered him wheelchair bound. Mr. J continued to decline until his death on March 9, 2011, just 23 days after his fall. An autopsy revealed that Mr. J’s death was precipitated by the fall.

Jules Olsman and Donna Mackenzie have filed suit against Hope Healthcare Center on behalf of the victim’s wife.