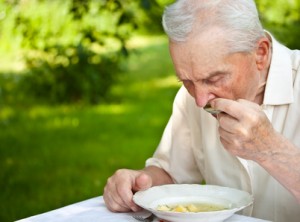 Staff members at Barss Residential Long Term Care in Fort Gratiot, Michigan, failed to prevent a known “fast eater” from choking to death on his food on July 29, 2011.

Several times, Mr. M was observed eating at a fast pace, and having difficulty swallowing the often-large pieces of food he consumed.  Mr. M’s nurses and aides charted several instances of him having difficulty swallowing or choking on food.  On February 1, 2011, Mr. M attempted to eat a large portion of a sandwich without chewing.  A staff member had to perform the Heimlich maneuver on him to dislodge the food.  After that incident, the kitchen was ordered to cut his food into smaller pieces.  Staff members were directed to help Mr. M by giving him verbal cues to slow down and chew his food thoroughly while he ate.

July 29, 2011, Mr. M was eating his dinner alone, without the assistance of an aide, which was in direct conflict with the requirements laid out in his care plan.  Although it was documented in an incident report that a staff member was helping Mr. M, video surveillance shows he was in fact feeding himself, without assistance.  Two staff members found Mr. M limp shortly after he began eating.  Instead of giving Mr. M the Heimlich maneuver to dislodge the food from his airway, the two staff members rolled him in his wheelchair into the lobby to wait for an ambulance.  Emergency responders found large amounts of food stuck in Mr. M’s throat, blocking his airway and preventing him from breathing.  Even though the emergency crew removed the food from Mr. M’s throat and inserted a breathing tube, he was unconscious, not breathing, and pale when he arrived at the hospital.  Mr. M was pronounced dead shortly after arriving at the hospital.  The cause of death was listed as asphyxiation (lack of oxygen) due to food aspiration (breathing in a foreign object).

Stephanie Arndt of Olsman, Mueller, Wallace & MacKenzie has filed suit on behalf of the family of Mr. M against the owner of Barrs Residential Long Term Care, B.A.R.S.S., Inc., for negligent acts which led to the choking death of Mr. M.